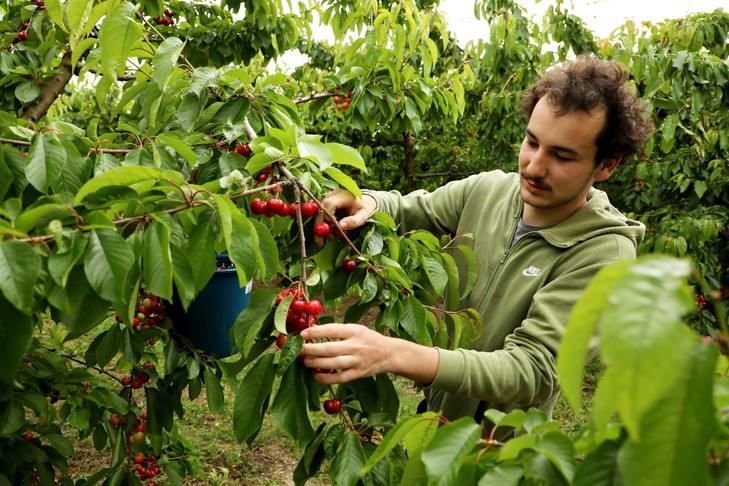 ” We are worried “, asks Isabelle Giordano the director of the Federation of Farmers’ Unions (FDSEA) of Bouches-du-Rhône. “The local workforce and that offered through recruitment platforms will not be enough. The crisis is before us. “

A workforce blocked at the borders

Corollary to the Covid-19 epidemic: the employees employed every year on farms in this department are mainly stranded outside French borders. As many arms missing while the crucial crops for the fruit industry of cherries, peaches or melons are announced, from mid-May.

Provence-Alpes-Côte d´Azur is the leading French region producing cherries, apples and pears, the second for peaches. Every year, Romanian, Polish, Spanish, Portuguese and Moroccan workers come to work on the 4,200 farms in the Bouches-du-Rhône, for example. “I would say that in the department, there is a shortage of around 6,000 people, usually employed on direct contracts or through the French Office of Immigration and Integration (OFII)”, says the director of the FDSEA.

In Saint-Martin de Crau, Patrice Vulpian has been producing peaches, nectarines, apricots and Crau hay since the early 1980s. In full season, from mid-May to mid-September, its operation “Medium-large” as he describes it, welcomes around fifty workers in the fields, and around forty at the packing station which conditions the 1,500 tonnes of peaches and 300 of harvested apricots.

“I am missing about twenty workers who were to arrive from Morocco in early April”, alarms the farmer. For the “thinning” of its peach trees (operation which consists in eliminating before magnification part of the fruits produced to optimize their development), which takes place between April and the beginning of May, the operator had to compose. He launched calls on the Wizifarm recruitment platform with the “Arms for your plate” initiative, through Pôle emploi and on Facebook: “It’s system D, but it happened. But for the harvest, you need people who know the job. And there is a big concern. “

Being a farm worker cannot be improvised

Seasonal workers – pickers, tractor drivers, team leaders, drivers, etc. – greeted by Patrick Vulpian come back from year to year. “It’s been settled like that for ages. They are people in autonomy. I’m not on their back and I ask them to be efficient. Which is difficult with people who have never worked in agriculture and will not make a career out of it. “, resumes the owner of the farm.

In addition to the shortage of seasonal workers, there is a loss of skills. “People came to lend a hand at the start of the season, it’s commendable, complete Isabelle Giordani. But being a farm worker cannot be improvised. “

The lack of manpower makes the departmental director of the FDSEA fear an impact on the harvest, on the availability of products and, consequently, on their – higher – price for the consumer. “It would be very detrimental to have only imported products on the tables”, she anticipates. Do not pick up? Patrice Vulpian doesn’t even want to imagine: “I just can’t afford it, otherwise I will sink!” “

→ RE (READ). The FNSEA assumes the rise in prices and calls for “eating French”

Like the representative of the FDSEA, the farmer is calling on the government to soften the rules on the movement of European seasonal workers within the Schengen area, in particular Spanish and Portuguese workers. “We need people to be able to come and work on our farms, or else it will be catastrophic”, he concludes.

Coronavirus, Conte’s appeal to responsibility: “Now it’s up to us to decide whether we want to avoid painful head-ons”