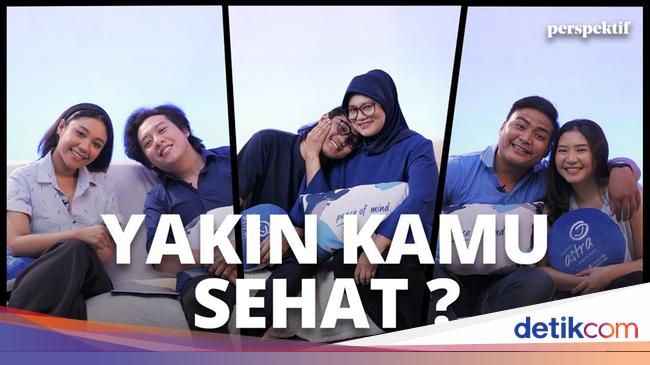 Life in a fast-growing and dynamic metropolitan city like Jakarta requires people to be able to adapt. If we look at the lifestyle of young people, many of them work all-out to pursue their dreams and fulfill both their needs and desires.

Without realizing it, these routines have a lot of impact on their health. Lack of rest time, the habit of consuming instant and sweet foods in excess, drinking coffee every day, lack of exercise, to a workload that is too large are factors that cause various unexpected diseases.

To find out how aware the younger generation of the capital city is about their health, Perspektif conducted an experiment on 5 respondents. They are Frenda (23), Regina (23), Meizy (29), Azizah (26), and Ilham (25).

When asked about health scores, many of them gave relatively low scores.

They admit that the high demands of work have led them to adopt an unhealthy lifestyle.

“I can sit for more than 8 hours a day. I myself can’t get rid of coffee. I also reduce sugar if I can,” said Azizah, who works as a scriptwriter.

Health problems are a common problem experienced by young people in big cities. Data from the Harmony Healthcare IT Survey shows 70% of young people in the world choose to search for their own health advice via Google instead of going directly to the doctor. Meanwhile, 41% prefer to consult a doctor virtually.

Not everyone knows for sure the state of their health. In fact, sometimes it is the closest people who know more about our health condition than ourselves.

The perspective also brought in the closest people from the three participants. They are Eki (25), the son of Meike, Elnatan’s lover, Vio (23), and Edo’s sister, Earlene (21). All three were asked to write down a health score for their loved ones based on factors such as diet, lifestyle, frequency of exercise, mental health, and sleep patterns.

“First there is the diet. This is why I give 60 because he (Elnatan) eats instant noodles every day,” said Vio about his girlfriend, Elnatan’s diet.

“I’ll give you a minimum of 50. I don’t have enough sleep, because I’m back at work in the morning,” said Earlene about her sister’s sleep pattern.

Elnatan and Edo did not deny the answer from their loved ones. While agreeing, they also admit that they have a lifestyle that is not good for health.

“It’s true what my sister said. I often say sports, because I’m still active as a basketball athlete. However, actually in the sports world, the key is that you have to get enough rest. Well, I force sports but I don’t get enough rest. the impact is also not good for health,” explained Edo.

At the end of the experiment, the three of them also conveyed messages and reasons why they wanted their closest people to always be healthy.

“The point is to be healthy, live a long life. So that I can see Eki later when you have children, have a new grandchild. What I had hoped for from Eki, Eki could accept it,” said Eki to her mother, Meike.

No one can guarantee health conditions in the future. Therefore, all participants in this experiment agreed that insurance is important to protect health.

“With my work mobility, which is quite a lot, which is quite high, I think insurance is one of the most important parts for ourselves. So for friends, if it’s enough and can join insurance, why not,” concluded Edo.

Local residents of the channel have been living with fear of losing their home for 44 years: “You will not get this explained to anyone”