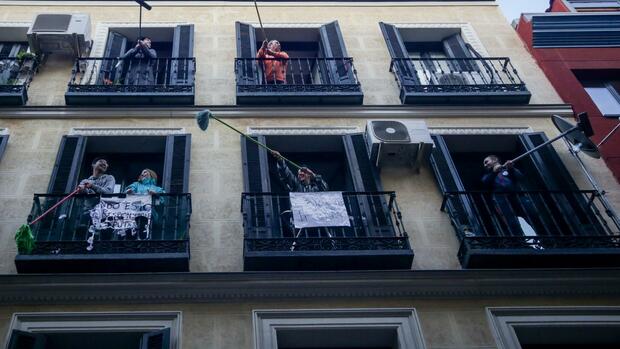 Five lanes lead to the center of the Spanish capital via the noble shopping street Calle Serrano. But the background noise does not currently consist of roaring engines, but chirping birds. In addition there is the beeping of the traffic lights, the signal for the visually impaired. The alarm takes up the traffic artery acoustically. It is the new sound of Madrid, only occasionally broken by sirens from the police or ambulance.

The corona virus is raging in the city like no other in Europe, only in the Lombardy region are there more infected and deceased. In terms of population, no other country in the world has more deaths than Spain and Madrid is the epicenter of the disease. More than 6400 people in the metropolitan region with just under seven million inhabitants officially died from the corona virus.

The virus robs the city, which is usually bursting with energy, with its character. No operation in restaurants, bars, empty streets. At Easter, the center looks like a film set in which the filming has been completed – magnificent buildings on deserted streets.

On March 14, Spanish Prime Minister Pedro Sánchez issued the alarm state, which includes the strictest curfew in Europe. The Spaniards are only allowed out of the house alone and only to go shopping.

Leave the apartment for the first time after four weeks

In the past two weeks, Sánchez had ordered the economy to shut down almost completely. Only those who are on a daily basis in a vital industry such as health or food retail were allowed to go to work. This ban has been lifted since this Monday. Nevertheless, a lot of life has not returned to the city.

There is a supermarket not far from Calle Serrano – the only place where something like life prevailed at Easter. Isabel Serrano is marching there with a brisk step towards the entrance. The sun shines in the face of the young woman, who looks like she came straight out of the office with her blazer, striped T-shirt and ballerina shoes.

But the impression is deceptive: Serrano left her apartment for the first time in four weeks. “I’m lucky and can work from home,” she says, just like her husband. He only left the common domicile during the curfew to buy groceries. Now it’s Isabel’s turn.

The strict curfew ensures deserted streets in the Spanish capital.

“We try to go out as little as possible,” she says. “We are now watching a lot of series, reading and working – that’s hard, but that’s how time goes by.” Your city doesn’t recognize her. “Madrid is always so full of life and we all love to go out and meet friends here – but now everything is quiet, it’s like in a science fiction film,” says the financial expert.

The Corona plague is likely to have fueled the Spanish zest for life. In normal times, the taxis in the city center jam themselves at four in the morning. There are bars, sidewalk cafes and restaurants on every corner. It is preferable to meet in large groups and greet each other with a cheek on each cheek – ideal conditions for a virus that spreads via droplet infection.

The close ties within the families – who usually meet with all generations for lunch on weekends – should also have helped. And the government reacted late and allowed mass demonstrations on International Women’s Day on March 8th.

In a bikini on the balcony

In the residential areas, the balcony doors are now wide open – if you are not allowed out, at least the light should come in. Usually the small terraces in front of the old buildings in Madrid are just storage space, for the air conditioning or when it comes up for a flower pot. Finally, you can linger in the bar.

But now there are often chairs in front of the balcony doors and when the weather is fine, residents in bikini sit on them. In the current situation it is the only place in Spain to intercept a few sun rays.

The City Park Retiro is closed. In front of the most photographed motif of the city – the Metropolis House at the beginning of the Gran Vía Boulevard – there is just as yawning emptiness as at the other end of the Gran Vía, where the theater and musical halls are located. Only a few TV teams have set up there to speak their announcers against the bizarre backdrop.

The dramas of the crisis

The pictures will symbolize the beginning of the worst crisis that the country has experienced since the end of the Franco dictatorship. Spain is already heavily indebted, unemployment was 14 percent ahead of Corona and the high dependency on hospitality and tourism should ensure that the crisis there lasts longer than in other countries. The self-employed and small businesses in particular are now worried about their survival.

“I lost 70 percent of my sales,” says Arsenio Sonseca. The taxi driver is the only one with his car in front of Madrid City Hall. Taxi and chauffeur services are one of the few services that are still allowed in Spain. Sonseca now often picks up patients in hospitals. He already has a queasy feeling. “I disinfect the entire car after every trip,” he says, pointing to his spray bottle in the trunk.

He wears a slightly battered respirator on his face, which keeps slipping down his nose when he speaks. Actually, he is a designer for the aviation industry, also for airbus worked. He was unemployed two years ago and is now trying to keep himself afloat despite being a taxi driver.

The curfew is well observed, but is also closely monitored.

Again and again he gets into police controls. A guest was arrested the other day. “Well, it was half past two in the morning and the lady had no ID with her,” he says. “Of course, this is not possible in the curfew. And what reason can there be to be on the go? The way she looked, it was a prostitute. Someone will have called her. “

The Spanish police issued more than 18,000 notices in the first two weeks of the alarm due to violations of the curfew. “If you are on the street now, you have to show your purchase receipt or explain which supermarket you want to go to – it should always be the closest to your own apartment,” explains a local police officer.

“Most of them abide by the rules,” he says. With five colleagues, he stands near the market square in the Mulitkulti district of Lavapies and checks passers-by and cars. His colleagues are in the process of felting a car – they search the trunk, open boxes, key behind the number plate, search in the back seat and in the glove compartment. The driver, a young Spaniard with a face mask, watches the procedure apathetically. When the officers find nothing, he continues.

“Drug sellers are now looking for new ways,” explains the policeman. “For example, they use couriers from delivery services and smuggle their material into the food,” he says. “That’s why we now always control everything.”

Diego Spitaleri is the driver of a delivery service. For him, the curfew is above all a rewarding business. “In the first two weeks I made twice as much sales as before in a whole month,” says the Italian-born. Instead of just delivering food from restaurants, couriers are now doing shopping for those who no longer dare to leave the apartment or who are infected in quarantine.

The 24-year-old experiences daily how differently the Spaniards react to the crisis. “Some want me to come up, others want me to put the food in the elevator. I didn’t see sick people, but I was paranoid. They turn their faces away and say: “Put it there”. Or: “Leave it there – and now go!”

Trivial pursuit in the apartment block

But there is also another Madrid. One where the residents brave the crisis with their own mix of humor and creativity. Not far from the Plaza Lavapies, the noise can be heard from afar.

“Who invented the vaccine?” Echoes from the roof terrace through the narrow alley. “A) Albert Einstein or B) Louis Pasteur or C) Edward Jenner. Elvira – it’s your turn. ”“ Louis Pasteur ”calls Elvira from the window opposite. “No”, it rings back and a long “ohhhhh” whispers from nine balconies in three different houses. “We play trivial pursuit,” explains Berta Rodriguez, who stands on the doorstep of her ground floor apartment with her boyfriend.

“Everyone has a topic and has to think about questions – my topic is the tabloid press, but there is also sport or cinema. We play because it is so boring to always be at home. A week ago we held a karaoke concert, someone gave the DJ on the balcony and we danced in our apartments, ”says the 35-year-old. She can hardly be understood in the babble of voices of her neighbors. “Who won the Tour de France five times?” Echoes from the fourth floor through the alley. Madrid has many faces, even in times of crisis.

Coronavirus: extension of containment until May 11 – Fil Info