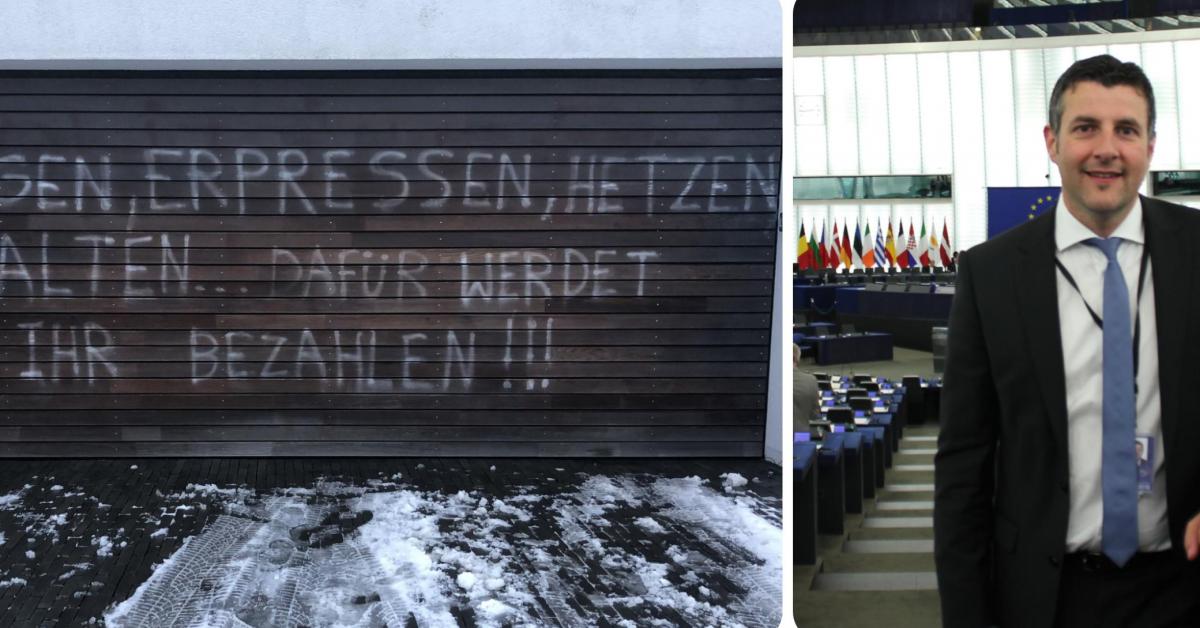 Awakening in pain this Saturday for MEP Pascal Arimont. He discovered a Molotov cocktail and a threatening slogan painted overnight on his garage door, in Bullange! His pro-vaccination remarks are the basis of this criminal act.

“And what comes next?” I can handle having someone criticize me or my work. Even in a heavy tone. But what happened goes too far. Much too far! “

Pascal Arimont, MEP for the German-speaking community born in Malmedy, revealed on Facebook on Saturday morning that he was the victim of threats at his home in Bullange.

A hateful slogan was written on the garage door of his house. Translated into French, it gives: “Lying, blackmailing, inciting hatred, dividing… you will pay for it !!! It was not the first time, since at the end of August already, its gate had been stained with red paint. This time, the MEP had not lodged a complaint or communicated on these threats.

But that’s not all. The MEP of the CSP (the German-speaking counterpart of the cdH) also announces that he found a Molotov cocktail thrown on its facade at night, “a meter under the windows where our children sleep. I am speechless and horrified, ”he wrote.

The police confirmed the existence of this incendiary device, which fortunately did not cause any damage, as revealed by the BRF. He had been thrown against the wall of the house with the intention of causing a fire. Pascal Arimont, 47, filed a complaint.

For him it is clear: it is his remarks on vaccination which have at the base of this attack. And in particular a Facebook post in which he pleaded for confidence in scientific discourse. The message was published Thursday, the Molotov cocktail launched on the night of Friday to Saturday.

“It’s going too far. Much too far! We are constantly forced to accept the opinion of others on vaccination, opponents talk about the right to freedom of expression, the right not to be forced to take action. But my family and I now have to fear for our lives because I don’t have the right to have my opinion? The radicalism of such acts always finds its origin in the words, ”he wrote.

“They call me a ‘coward’. But how cowardly is it to want to start an arson in a house where children are sleeping? I will have to protect my wife and children and myself. I hope the police find the perpetrator and I would like to thank them here for their exemplary efforts. “

While he maintains that anyone can say what they think, he also asserts that no one is allowed to attack anyone else or their loved ones. “When we give up on that consensus, we give up on everything that is dear and important to us. Don’t let them come to that. We too will have to “stand up”! », He concludes.

In the north of Sweden, the air temperature has dropped to -40 degrees

Natural Ways to Kill Wild Plants in the Yard