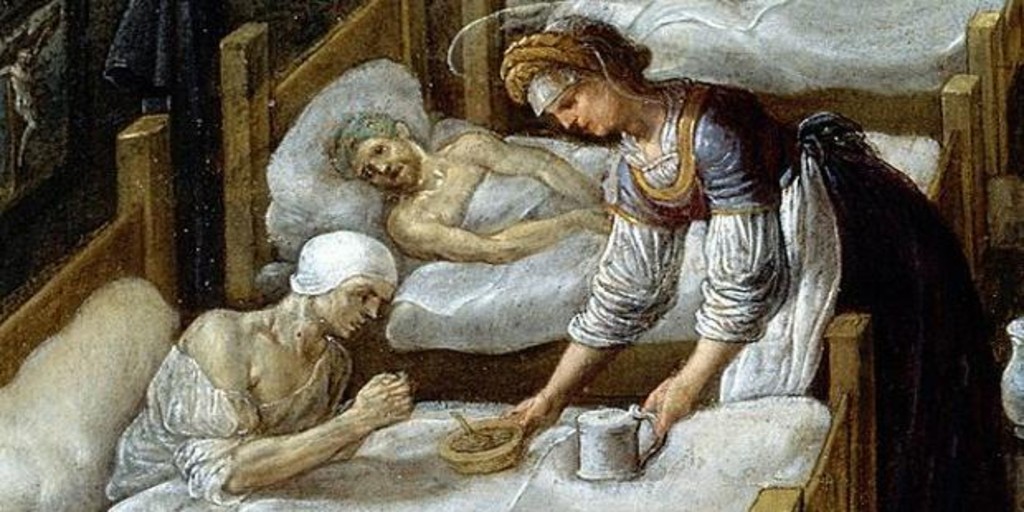 He Coronavirus has already exceeded 100,000 infected and 10,000 dead in Spain. The world is approaching a million positives and the 48,000 deceased. Since the pandemic began at the beginning of the year, our eyes have been focused, like never before, on the operation of hospitals and the enormous sacrifice that health personnel make to help our patients. Every day we applaud at 20.00, but have we ever wondered what this work was like centuries ago? What means and facilities did doctors and nurses have to cure victims of the devastating pandemics and wars during the Middle Ages?

“Few would doubt, today, that the best place to be if one is seriously ill is the hospital. The hospital is considered the most important institution in medical care, for both the poor and the wealthy. And it is often assumed that this was always the case. However, until recently, most people, especially if they were ill, would have struggled not to enter a hospital, which was associated with poverty and death, “said Lindsay Granshaw in her book. “The Hospital in History” (Routledge, 1989), to ask later: “What were hospitals like in history?”

Many authors have defended the image of the medieval hospital as a space established to carry out public and charitable work free of charge, to alleviate suffering and reduce poverty. And there were certainly models, like the Hôtel Dieu in Paris, one of the best of the Middle Ages and of which there is still abundant historical material today. In the 13th century, it already had four main rooms for patients in various stages of illness, another for convalescents and even one for maternity. So special was the care of the health personnel that the recovered patients used to voluntarily stay several more days to work on the farm or in the garden in appreciation of the services provided.

However, we cannot deceive ourselves. The vast majority of hospitals in the Middle Ages were not as efficiently managed as the Hôtel Dieu in Paris. This, in fact, was an exception. As documented, it was common for several patients to pile up in a single bed, regardless of what type of disease they suffered or if they were highly contagious. A mildly ill person could be placed in the same bed as one with no chance of survival. It was not uncommon for them to wake up with a corpse at their side, since segregation of the most serious cases was not a common practice. There were very few beds for such demand.

In fact, in the Hôtel Dieu, each bed was generally occupied by two patients, as represented in the illustrations of various artists of the time. And the beds, in turn, were separated by fabrics that were never washed and, therefore, facilitated the spread of infections and hindered ventilation. At least, in this Parisian hospital the rooms were heated with huge hearths and charcoal stoves and the clothes of the sick were kept in a closed room to wash and fix them before being returned. The organization of this center can be said to be similar to that of modern hospitals, with a chief in each department.

Throughout the High Middle Ages, pharmacies were put into operation, the first of which was opened in Baghdad in 754; glasses were invented, which by the end of the 13th century were already well known in Italy; dissection began to be practiced, shown in public by the doctor Mondino de Luzzi in 1315; Medicine was taught in universities, mainly in Europe; Ophthalmology, defined in the 11th century by an Arab physician, began to be practiced; An antiseptic method for cleaning wounds was discovered by the 13th century surgeon Theodoric Borgognoni, and quarantines became widespread following the arrival of the Black Death.

Throughout this period, religion had, of course, a dominant influence on the establishment of hospitals. In fact, it can be said that they were more ecclesiastical than medical institutions, where the sick were admitted and isolated to provide them with relief, with little attempts to cure them. Love and faith were more important aspects than the scientific skills and abilities of the priests, assistants and doctors, who were equally exposed and lived by their patients in the most precarious conditions. Sometimes, even costing them their lives, as they are exposed without any protection to those infected by plague and other epidemics.

One of the first moments of impulse was the 9th century, since a large number of religious orders created hospices and infirmaries next to the monasteries, where they provided food and shelter to the exhausted pilgrims who arrived sick. One of these, the famous alpine hospice of San Bernardo, founded in 962 in the Alps, still gives relief to the exhausted and sends their dogs to rescue lost mountaineers.

Hospitals increased rapidly during the Crusades, beginning in 1096. And not so much because of the war, but because of the plague and contagious diseases, more deadly for the Crusaders than the swords of the Saracens. A lot came up along all the roads leading to Jerusalem. A group of crusaders organized, for example, Hospitallers of the Order of Saint John, who in 1099 established a hospital in the Holy Land capable of treating 2,000 patients. It was the same gentlemen who, selflessly, were responsible for the care of the sick.

“Let the sick not be neglected”

Until the twelfth century, in which the great historian of medicine Mirko Grmek called the first stage of the configuration of the hospitals, its doctors and nurses sacrificed themselves following the «Regula Benedicti», dictated by Saint Benedict of Nursia a long time ago: «We must take pre-eminence of the sick; we must serve them as if it were Jesus Christ […], since He has said: “I was sick and you took care of me”. And also: “What you have done to one of these poor, you will have done to me. Therefore, it must be the abbot’s personal and moral obligation that the sick are not neglected in any case, regardless of their state and condition ”».

From that moment and until the beginning of the XIII, there was an important growth of hospitals in several countries in Europe. The main impulse was the Pope Innocent III, who set an example with a model hospital in Rome: the Hospital of the Holy Spirit. It was built 1204 and survived until no less than 1922, when it was destroyed by fire. Many visitors from all over the world came to see it as soon as it opened and inspired the opening of new ones in the Italian capital (nine in a short time) and in countries like Germany (155) during the early years of the late Middle Ages. To help them, the Vatican even helped obtain resources through a special tax on any commercial transaction that took place in the city.

Some authors have argued that the infrastructure of hospitals in the East was superior to that of Western Europe. It highlighted the Pantokrátor hospital, founded by the Byzantine emperor Basil John II, in 1136, on the banks of the Bosporus. It had 50 beds spread over five departments: 10 for surgical illnesses, eight for acute patients, 10 for male patients, as many for women and, finally, 12 for gynecological diseases and childbirth. And each one had two doctors, five surgeons and two nurses or servants, all under the command of two chief doctors, not forgetting the ambulatory department, the pharmacy, the own bathroom, the mill and the bakery. A luxury of facilities that were, obviously, another exception, to which it is likely that the poorest would not have access, but whose model extended to many places in Western Europe, including El Escorial.

The fight against leprosy

A few cities, especially in England, built municipal institutions independent of religious groups. “Like all hospitals of the period, the buildings were expensive, often decorated with colorful upholstery and stained glass windows, which had large, ventilated rooms full of lined beds. They were generally in charge of a teacher or guardian “, explained Antonio Luis Turnes in his article «Origin, evolution and future of the hospital». This doctor also explains that the walls were made of red brick or stone, that the windows gave almost no light, that there was hardly any ventilation and that they were not very hot.

When leprosy began to spread in the 12th and 13th centuries, lazarettes appeared, making it easier for collapsed hospitals. They were generally rough structures, usually built on the outskirts of cities and maintained simply to ward off lepers rather than cure them. Still, the members of the Order of Saint Lazarus, whose dedication and sacrifice was surprising, despite the little help they received from the authorities and governors.

In England and Scotland there were 220 and in France, around 2,000. In Germany they were even more numerous and they are considered responsible for establishing a control and hygiene protocol that prevented the spread of other epidemics. It is even said that it was they who began to eradicate leprosy. A work that was helped, with true dedication and passion, by members of other secular and religious orders, who dedicated their lives to the care of these sick. In London, for example, hospitals such as the Saint Mary of Bethlehem, the first to be used exclusively for the mentally ill; the of St Thomas and that of San Bartolome. The latter not only took care of the poorest patients, but also transcended the work of simply depositing souls that others had and organized with a chief administrator.

Philip II, King of the world